The Aboriginal culture of the Blue Mountains 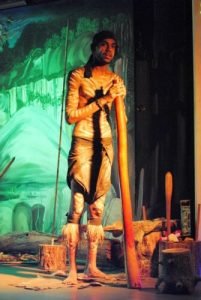 Learn about their culture and way of life. They used to use boomerangs as such a multi-faceted tool of survival. They would use them as a tool for scaring the birds out of the trees so they could then be spared. They would also use it as a cooking tool, also to hit kangaroos to knock them out and they were so effective that if they missed the target the boomerang would come back generally quite close to where it was originally thrown.

This made the boomerang an essential tool for the aboriginals and once every aboriginal man had to master if he ever wanted to become a respected man in aboriginal society.

They also used the didgeridoo as a dance and musical instrument. It would be blown into in a special way to create a deep bass-like sound. It could also be tapped on as it was being blown to create a special additional sound.